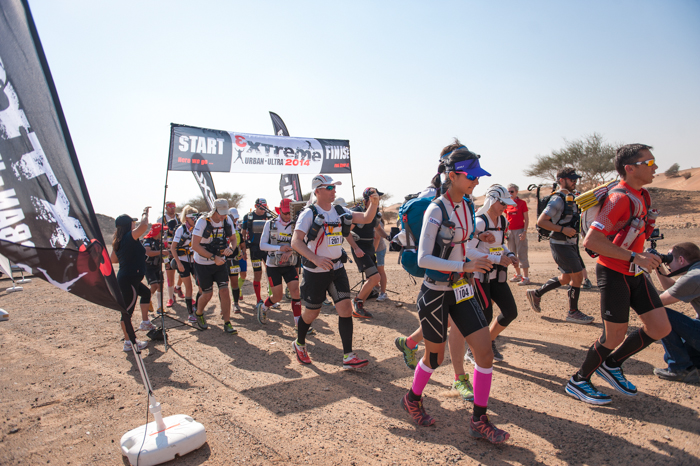 Just recently, I completed Dubai’s Extreme 3, a three day ultra race covering local desert and mountain terrain across a grand total of 140 kilometres. If I could sum it up in one word, that word would be AWESOME. I just loved being on the other side of the lens and it was truly refreshing not having to worry about f-stops, iso settings or RAW conversions. Instead, my days were filled with clocking up mileage,  freeze dried meals and trailing pink flags.

The course was spectacular. I’ve been exploring the UAE for over years and I still find I’m constantly discovering new places. The route took us through farms where you could smell the local herbs, through exposed wadi gorges, interspersed with massive boulders and, of course, through its fair share of deep sand! The desert always looks stunning but after hours on foot.., you realise just how relentless and unforgiving it really is. The team at Urban Ultra did a grand job in finding some pretty remote areas to stage the event and stitching them into quite a magical race route.

As for what attracts me to long distance running?
I guess it simply boils down to the desire to constantly push the envelope… both physically and mentally. Physically, this race required a hard push as I went in totally unprepared, just didn’t put in the training needed. Mentally, it’s an amazing mind game. Getting through day one and part of day two is relatively easy. Beyond that, it’s how you react to boredom and pain, when they strike, that has the potential to make or break your race. With a race on home turf, it’s just so easy to bail out, jump in your car, go home and just kind of get on with things. And admittedly, this thought did cross my mind a few times!

The start of day three was in no way, an enjoyable experience. My knees were playing up and the course started on the same 10k stretch we covered on the first day so I knew what was coming. Going home to the family was an undeniable temptation! But no, I pulled out my music and got the tunes going, clocked up the mileage, followed my nutrition plan and just got on with it. The two big boulder sections that followed were the highlight and certainly my strongest stages.
It sounds such a cliche but these events come to an end all too quickly… even going hard for 140k! And whilst a home race makes it easier to chicken out with an easy departure, it also allows for your family to be at the finish line. And that for me, was also awesome… to be welcomed with open arms by my wife and our two boys. Getting my medal from my four year old felt enormously special. It was also great to enjoy the support and enthusiasm of my in-laws, although I must admit, they seemed a little bemused and puzzled by the commotion and draw of an ultra!
I placed 3rd overall, which made me feel equally humbled and surprised. Admittedly, it sounds a bigger achievement than it really is. To put it in perspective, this inaugural race had only 11 finishers out of 22 starters. Quite a few got lost on day two and for a change, I had paid attention so I saved some time and took 2nd position after CP2. It certainly felt special to see just a single pair of footprints ahead of mine in the desert sands and having signed up for some quality time immersed in nature and to share the trails with likeminded runners, the podium finish and trophy came as a wonderful bonus. All in all, we shared lots of laughs, told great stories and had an epic adventure so my thanks to all involved.

Many strong athletes struggled with the multi day racing thing, especially when it came to their food and water intake but I’ve no doubt, these guys will return next year much stronger and armed with a tighter plan. Extreme 3 2015 will be bigger and better as a result. Bring it on!
Wk.
Images by Louise Adamson
Video by Rupert Chesman