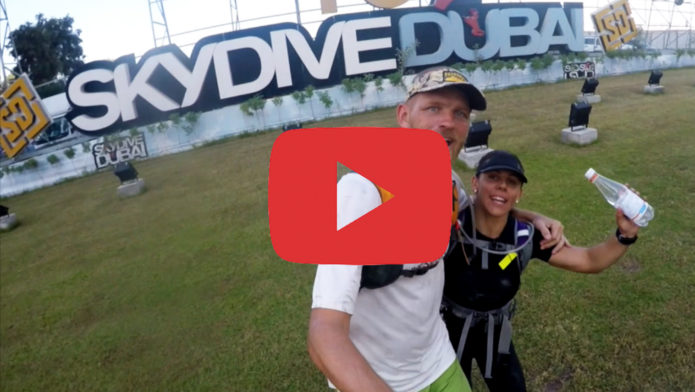 Being surrounded by inspiring people brings immense value. Their positive energy rubs off on others, instilling passion and motivation. Eva Clarke is one of these people. She even has not one, but eleven, Guinness World Records to her name.

I’ve been working on a short film about her passion. During an interview, she shared her fear of heights. Time to crush that fear, I thought, as I went ahead and secretly booked a tandem jump for Skydive Dubai.

In response to my telling her what I’d done, she turned a whiter shade of pale before saying, “Well, if you want me to jump out of a plane, we’ll have to run to Dubai first.” I’m not sure if she was hoping I’d turn that mad idea down but I accepted. Not because it was a smart idea, I should add. Far from it!

So 5pm on the 3rd December, I find myself at the start of a 100+ kilometre run from Abu Dhabi’s Yas Marina Circuit to SkyDive Dubai. Something inside me told me she’d be giving me a real un for my money…

We ran through the night, climbed fences, danced around sprinklers, lived Eva’s dream of being chased by wild dogs, dodged potholes in the pitch black, had crazy food cravings and pulled each other out of the occasional dark place. We actually had a lot of fun!

Thankfully, I was in charge of navigation. Had this been left to Eva, I suspect we’d still be running. We sounded like an old married couple just getting off Yas Island, when Eva wanted to run in the wrong direction toward Saudi Arabia.

In the middle of the night, we had a taxi reverse towards us on the highway (as they do). I looked at Eva and said “You know this is our exit out of here!” She smiled and he drove off,  leaving us staring at his red tail lights.

Towards the end, the run became more of an endurance challenge, pushing and clocking the mileage as we went along. Admittedly not much running anymore. The long march home. The lack of long training runs was apparent and my legs felt pretty trashed.

To be honest, I was a little disappointed over the time it took to cover the 108 kilometre total. We were on the move for just over 19 hours and I’d been hoping to take around 16. I had to find peace with this before feeling happy with the achievement. The key is that neither of us were prepared for this sort of distance and after eight or so hours of forward motion, the body starts to protest. We were dehydrated even at the start line and then ran out of water a couple of times.

The first 60km was on hard-packed surface through Abu Dhabi’s residential suburbs and more remote farm roads. It was pretty scenic and safe to assume, I think, that no expat has run through much of it before. We hit Sheikh Zayed Road just before the Gantoot turnoff and that’s when we actually had to start running next to the highway. However tempting the hard shoulder was, for safety reasons, we stuck to the sandy patch alongside which sucked every last drop of energy from our legs. Soft sand, thick bush and running on a slight decline for 50km. It was tough and completely insane.

As the run was totally spontaneous, we had no idea where our refueling stations would be, nor the total mileage or even the best route from A to B. I guess that was all part of the adventure, using Google Maps to figure out our route along the way and getting crazy looks from people at gas stations. The best ones came from fellow walkers along the promenade at Dubai Marina walk. People were staring in sheer disbelief, some with disapproval in our filthy kit. This only fuelled me more. There’s nothing like shaking up the system.

I filmed the full run and carried a recording device to capture our conversations too. Check out Eva’s Instagram page where she posted live social feeds too. I think there’s a great story in there and am looking forward to seeing where it leads to.

Needless to say, we were both delighted to reach Skydive Dubai. Big smiles. Big HUA! I was glad it was over although for Eva, the run was only the precursor to the sky dive to come. At the registration we were both put on scales for a weight check. To my huge disappointment, I was told I was too heavy. “What?!?” I was four kilos over the 100kg maximum weight limit so they wouldn’t let me on the plane. Believe it or not, I really was gutted as I was looking forward to ending this epic adventure on a true high. Eva rose to her challenge and experienced the jump of her life. She was ecstatic on landing with fellow Red Bull athlete.

Would I recommend others to do crazy shit like this too? Yes. Hell, yes. Always. The body heals with remarkable speed and all you are left with is a handful of wonderful memories. For those toying with following in our footsteps, we went for the safe option by hugging Sheikh Zayed Road all the way from Gantoot to Dubai. I would actually recommend running parallel to this, in the actual desert (possibly on gps navigation). This way, you’re away from the traffic but you do also lose out on refuelling stops at gas stations so this needs to be taken into consideration. An alternative is to go via Bab Al Shams, which although means throwing in a few extra kilometres, the terrain is way better. Whatever the route, there’s no escaping soft sand.

A big thanks to Eva for challenging me to run my first 100k and for being a great running buddy. We made a good team. I don’t normally talk much when running but we rarely had a quite moment.

What next I wonder?! Perhaps I’ll challenge Skydive Dubai to support us with a helicopter jump to some random remote desert location  then we’ll navigate our way back to the bright lights via GPS. Then perhaps stair climb to the top of the Burj Khalifa. Why not? This would be incentive enough for me to lose those extra four kilos. Eva, is there another Guinness World Record opportunity there?