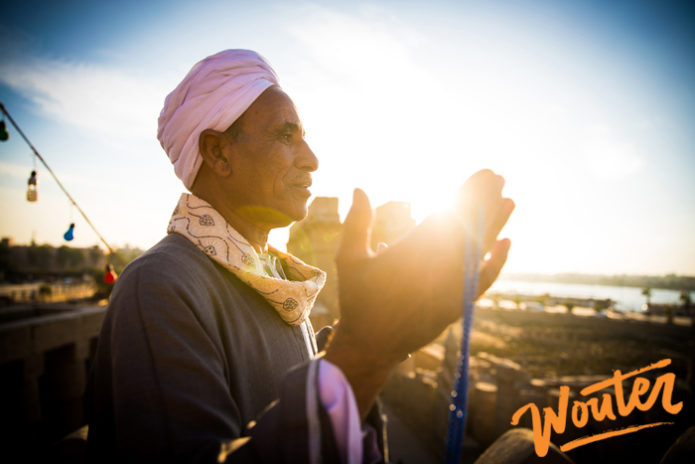 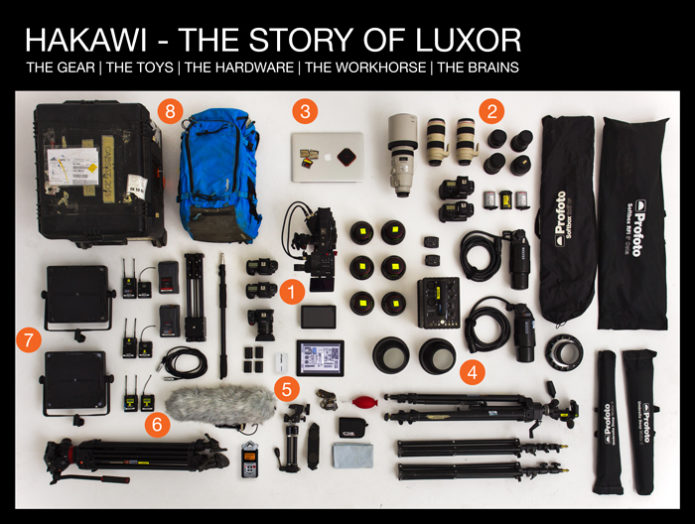 Boys and their toys! For Luxor, we didn’t travel light. This is what we packed for a week long film and photography production.

Pictured in this image is pretty much everything we used, apart from the DJI drone and Ronin stabilisation rig. 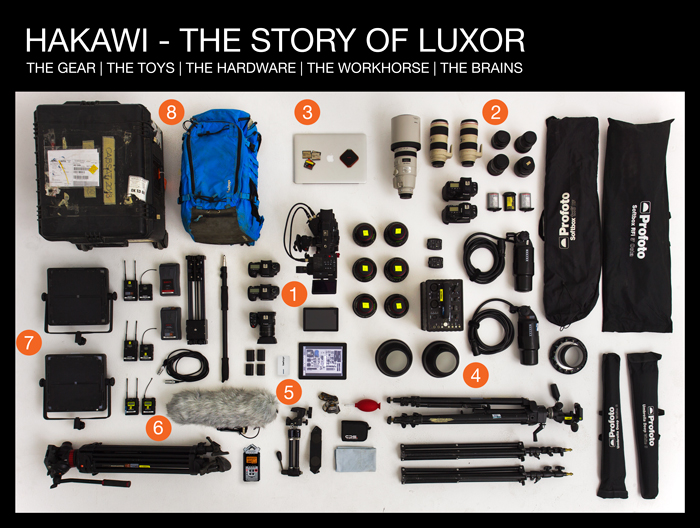 We used the Canon C300 Mark 2 as our prime cinema camera. We shot with both their stunning cinema lenses and their standard EF lenses, paired with Atomos Shogun as 7” external monitor. We took the XC10 for some of the hard to access point of view shots. It also shoots 4k so easy to cut in the main edit. I brought two of the Canon 5D mark 4 for the behind the scenes filming used by Christina Everington.

Nothing goes without a MacBook Pro these days. As we were filming 4k, we geared with SanDisk Extreme Pro CFast cards and used their portable SDD hard drives for storage and constant backups. We did intermediate media checks with Lightroom, Photography and Final Cut Pro. To learn more about workflow, check out this previous post.

We used the Profoto B3 battery pack with their Airsync. Two flash heads and a range of dishes, softboxes and umbrellas. I’ve had this kit for years. It’s such a reliable piece of equipment and produces consistent quality light.

I love my mini studio build using the iPad and Camranger as a second screen to evaluate images and keep the client and team away from the camera. Field cleaning kit and a headtorch too.

For the film production, we brought the following audio recording; lapel mics and a directional microphone with a big boom stick. Recorded directly to Zoom H4.

Simple battery powered LED lights as a quick fill in light source for both filming and photography.

My trusted companions for every gig. Pelican cases, which are the only way to transport precious equipment and survive the endless beating of air travel. They also make useful apple boxes. I love my fstop backpacks too. The internal units carefully store photo/film gear and the pack carries just like a comfortable backpack. 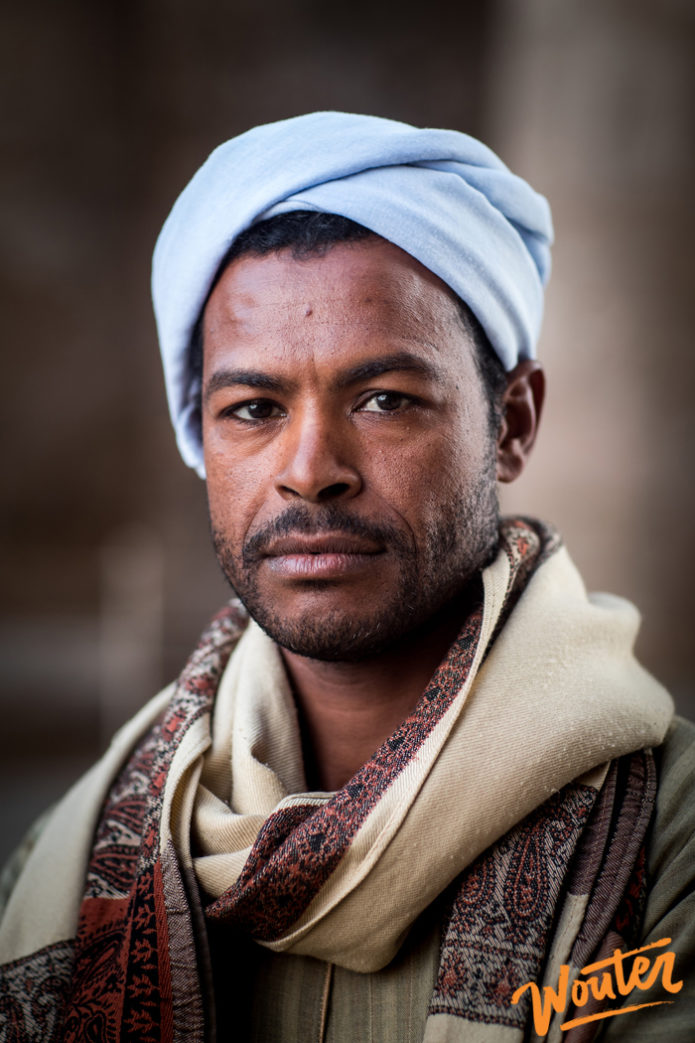 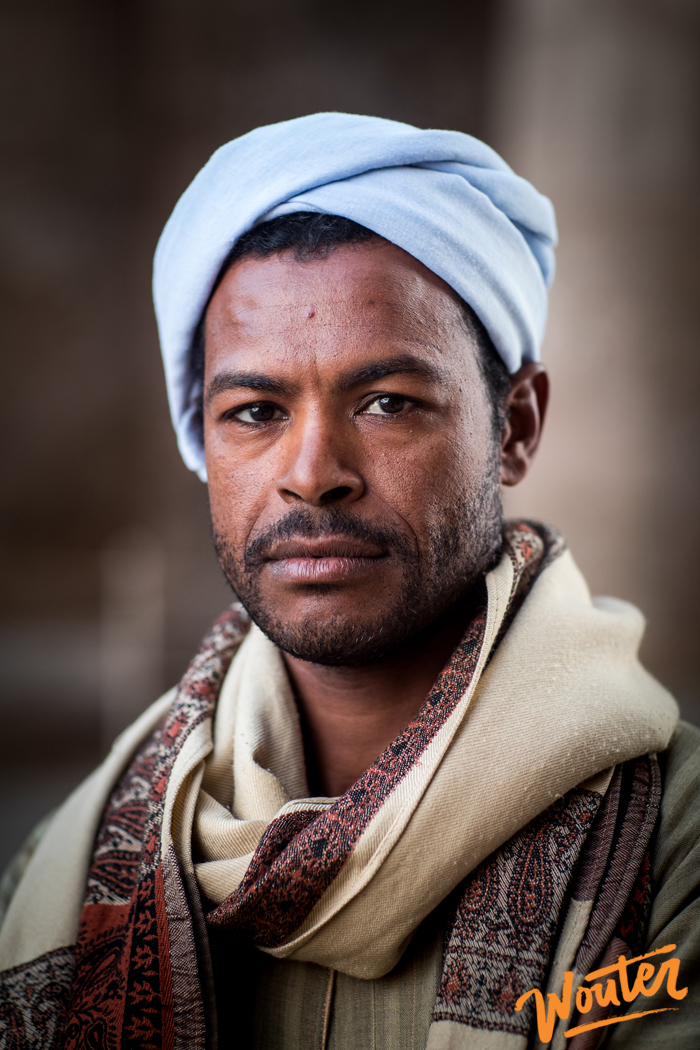 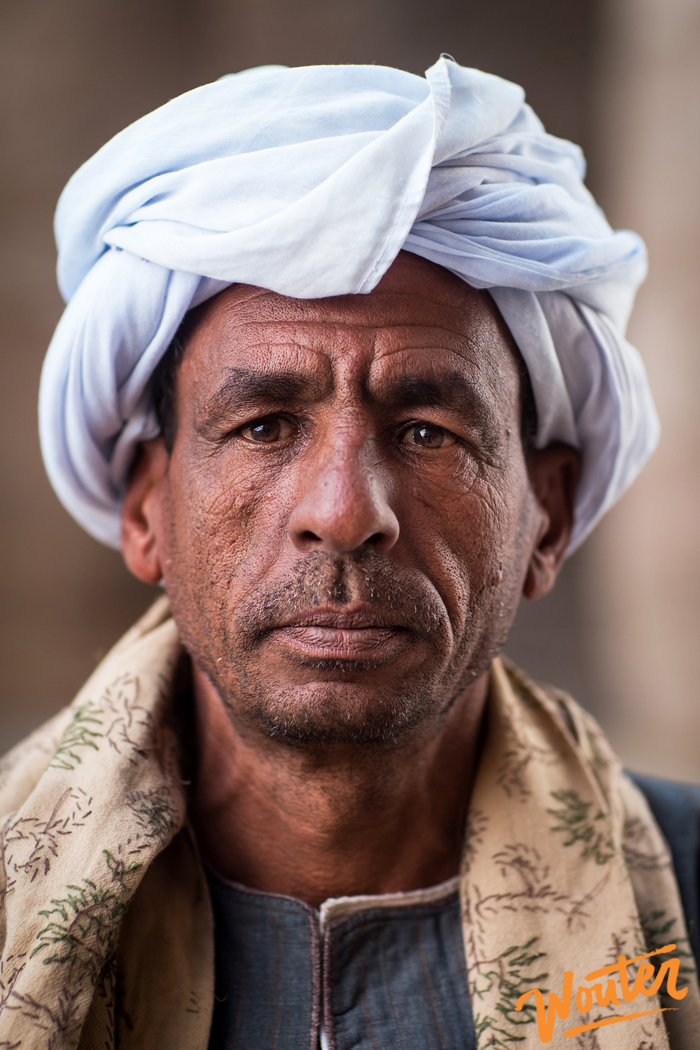 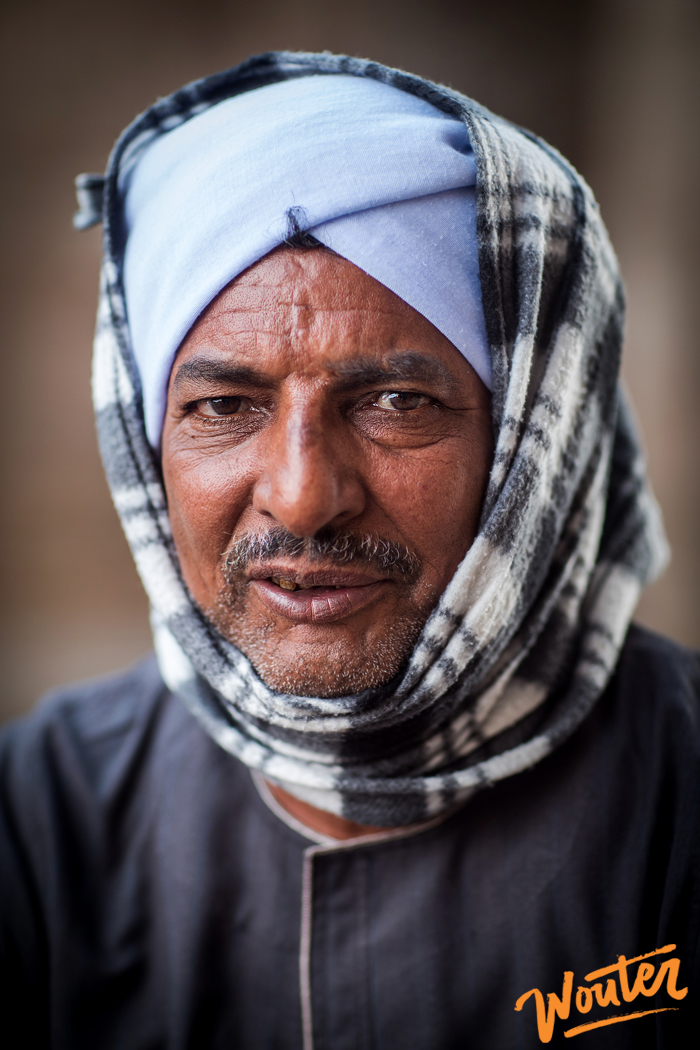 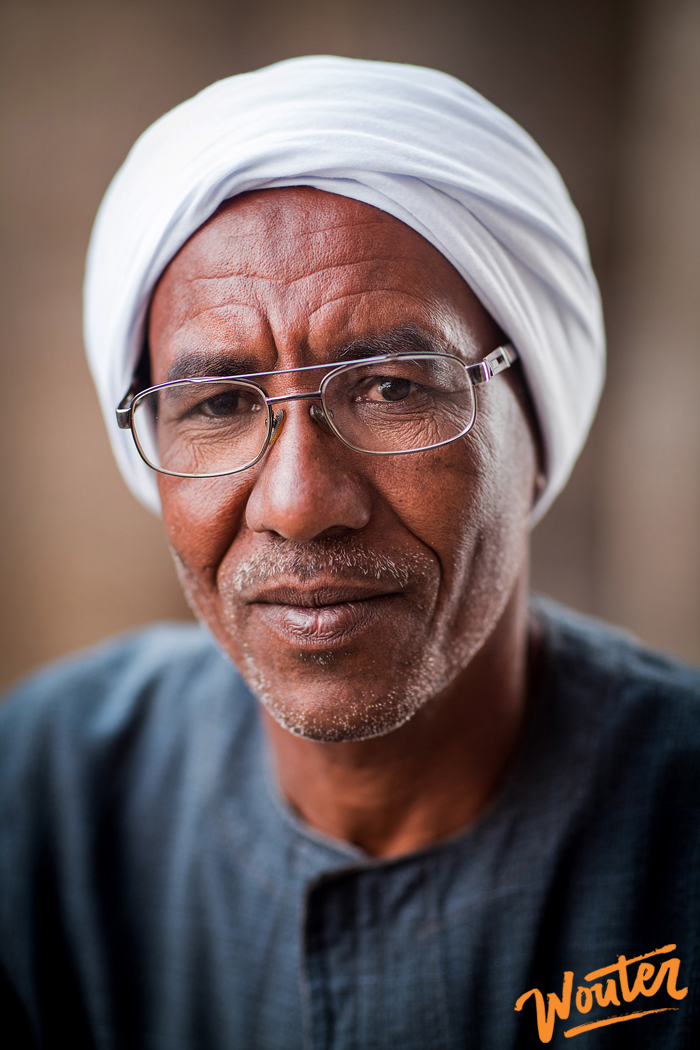 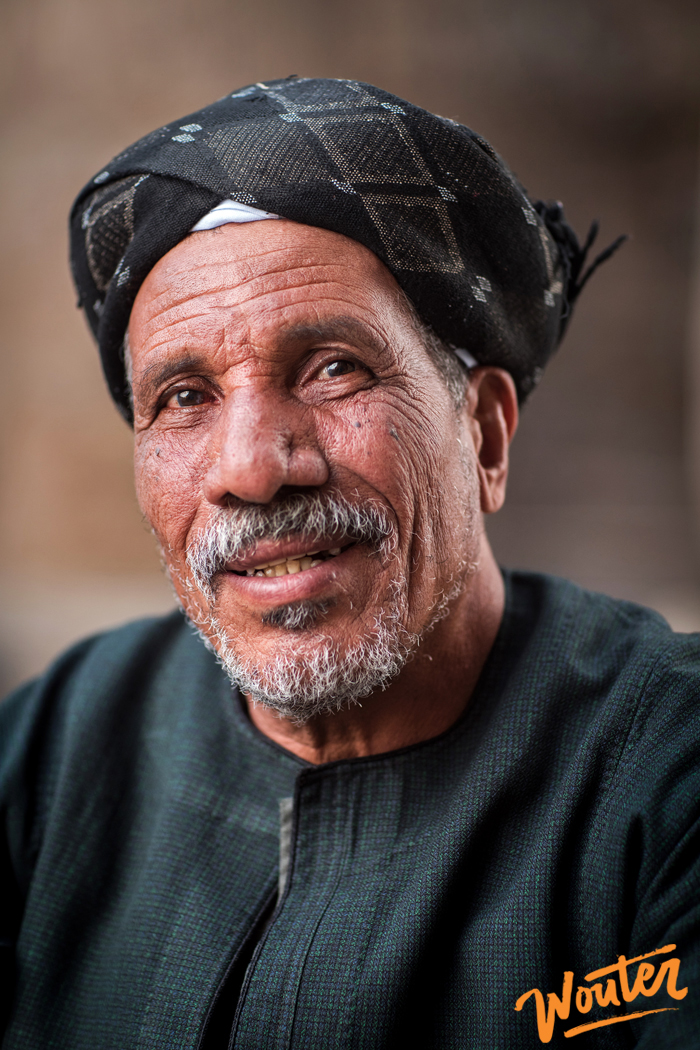 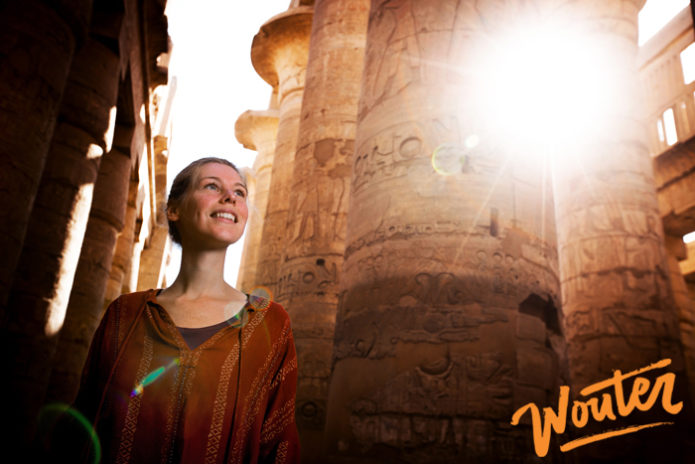 Intro Luxor & behind the scenes

This is the first of a series of posts about Luxor in Egypt. The Canon office called me in to discuss a project that would be straight down my alley. In a nutshell, Canon made the commitment to support the people of Luxor with visual assets to help promote their stunning destination. Tourism in Egypt has been having a rough time and needs a push with some fresh creative. 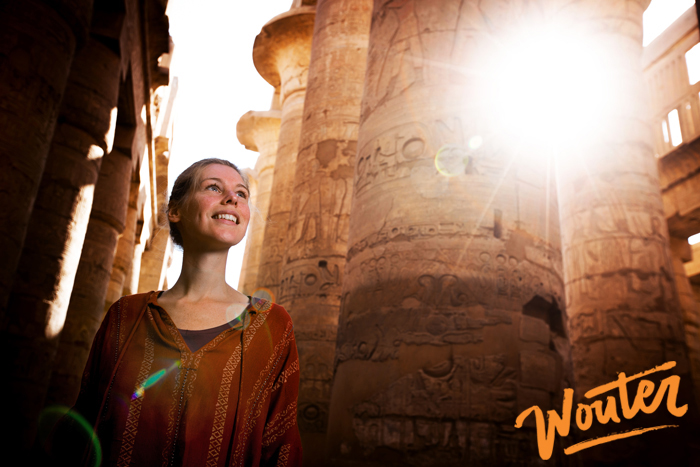 We did a scouting trip in November last year to figure out the scope of work, meet the Governor and seek inspiration for the storyline. I was shooting and producing. It was a typically hectic scouting trip, with long jam-packed days but I needed to get my head around the project and all it entailed.

This post is about the photography side of Luxor. I shot a handful of advertising style images, a stunning portrait series and an additional refresh for their destination image bank. My workhorse was the Canon 1DX Mark 2. I love their 1 series body. Thanks to the size, it just holds so nicely. It’s well balanced too with longer lenses attached. It has heaps of pixels and for me, the icing on the cake is that you can push the ISO setting and keep on shooting handheld with ambient light. This is great in darker spaces.

I worked with a mix of lighting scenarios. Most of the Luxor hero images were shot with Profoto studio lights, used both indoors and outdoors. We worked with pure ambient light when on the fly and occasionally used LED panels as a quick fill in option for portraits, whilst shooting with lower aperture. We moved through our long shot list of destination image bank shots pretty quickly so kept our gear light.

We nailed some amazing golf action shots with the 14fps and the awesome EF 200-400 lens with the 1.4 build in extender. Such a strong combo for isolating sport action. The focus tracking works perfectly with amazing sharpness. The new telelens is so much lighter than my alternative EF 400mm lens, enabling you to shoot handheld most of the time.

Luxor is so worth a visit. I’ll be taking my boys there to experience ancient storytelling with all the temples and tombs, alongside the vibrant colour and character of the bustling souks and the lush green east coast of the river Nile. Please check out Hakawi, the short destination film I produced… and keep your eyes peeled for my next few posts.