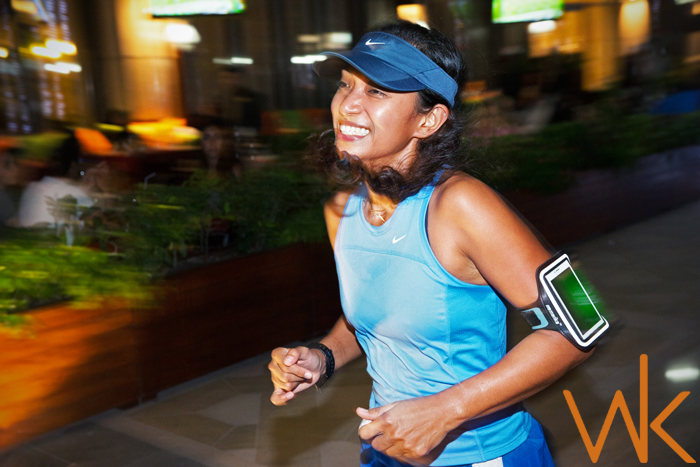 With the hot and steamy summer now behind us, we’re all back to enjoying the magical outdoors again. As many know, I’m a big fan of getting outdoors and exploring new places. My personal project ‘Exploring Old Dubai’ was a prime example of venturing somewhere new, even when it was right here on our doorstep.

The Nike Running Club has changed their formula this season whereby, every month, they plan to gather a crowd and take them to new running locations. Last weekend, they kicked off from Downtown’s Vida Hotel and ran a route around the Burj Khalifa. 21st century city slicker running at its best! The previous month they took on the energy of… Safa park, where The Archive was used as a base. With the season only just starting, there will be plenty more to look forward to so stay tuned to the Nike Running Middle East facebook page.

So, what’s it like shooting for them? Two words: challenging and sweaty! Over the years that I’ve worked for Nike, the team has always been very clear on their brand photography and their briefs are very visual. They clearly want to be talking in a certain style to a certain demographic. Their runs are always short and intense with a big crowd of people. What I love is that anyone can join. You just need to pitch up and join in. The downside is that amongst a mass of multiple brands, mixed ages and athletic backgrounds, I have my work cut out in catching my shots. Add to this, viagra generic cheap that we’re working post sunset, which makes the shoot super techie… dropping shutter speeds, cranking up the ISO, dealing with focusing issues… and you can also only ‘catch’ the crowd a few times. I tend to try and run ahead, taking short cuts where necessary or jumping on a bike, but this of course means that you need to know the route beforehand. The Canon 1D X is certainly the best gear for the job and I blogged about this when I tested their first demo unit at the Nike run on The Palm last year.

So from a photography point of view, this sort of shoot is no easy task but I love it all the same and I’m always delighted when the phone rings with the promise of new shoot dates. It also gives me an excuse to spend time with Coach Tom, who does an inspirational job in encouraging runners to raise the bar. Tom is a fellow entrepreneur and his energy and drive always rubs off.

Yip, they sure do get it right at the Nike Running Club and I’m stoked to play a role in spreading the word.

how to make penis longer