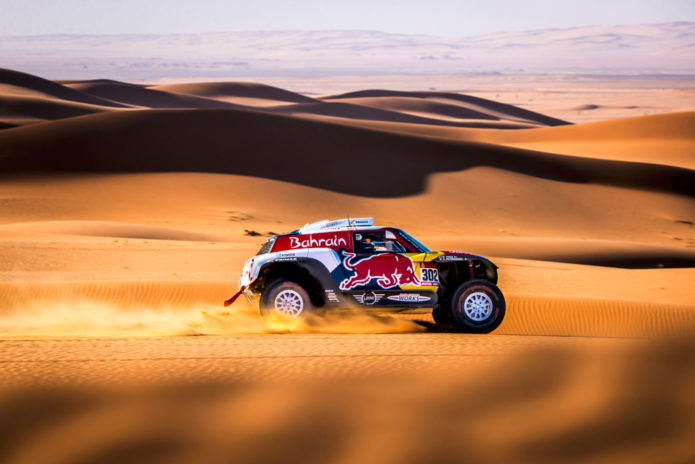 On the first of January I find myself making an early departure from our family ski trip in the Austrain Alps. Leaving the snow behind, seeking a completely different adventure in the wilderness of Saudi Arabia. After 40 years of exploring Africa and South America the iconic Dakar Rally has embarked on a new chapter in the Middle East, within its host country Saudi Arabia.

I’ve spend part of my expat childhood living in Saudi Arabia (1983 to 1985) and from 2003 frequently been travelling there for work gigs. The magical Kingdom, how I call it, has gone thru an array of developments and changes. Specially the growth spurt under the leadership of HH Crown Prince Mohammed bin Salman bin Abdulaziz has put Saudi Arabia in a global spotlight.

Bringing the epic rally to Saudi is just another great way to showcase the beautiful natural wonders they have on offer. I’ve seen lots of Saudi, mainly empty desert roads and flashy big cities, I even crossed the full country in 2019 with Khaled al Suwaidi who ran his 1755km pilgrimage to the holy city of Mecca. Over the years I was always moderately excited about its landscape. Until…

Only the best of the best athletes and petrol-heads come to race, win or play. Regardless of their goals they are all striving for the finish medal near the capital of Riyadh. I found the Dakar community super nice. A unique pack of individuals, all in it for the spirit of adventure and that bonds people immensely.

So, what does it take to shoot a beast like the Dakar Rally? If anything, it’s good planning and access to information. In parallel its working by (possibly bending…) the French rules set by the organizers ASO. It’s an oiled machine that runs on clockwork like the Tour the France (also their event). It works super successfully yet it is hard to penetrate by outside creatives, specially those who seek to create something different outside the written script….  My first words of advice during registration was ‘Dakar doesn’t wait. So be ready.’ A message that set the pace and certainly lived up to its promise.

The team and my direct client at Professional Sports Group made an engaging docu-series around the theme of #MySaudiDakar. I was stoked to be one of the selected few to share my personal experience. So, THIS is what it takes to capture the Dakar Rally.

Days start early, well before the crack to dawn, leaving camp in beefed up 4×4’s and solving the mystery game of location finding. Dakar is a fierce global competition and advance route info may benefit some, therefore no course info is shared in advance. Even for the official photographers/filmmakers… For registered content makers there is a secret code group who, at the very last minute, receive just enough course info to than race thru the darkness trying to find a magical viewpoint, ideally with multiple angels to broaden the mix. It’s a stressful morning game of hide & seek, racing against the clock to avoid ‘live rally’ route closure.

Once the race is live, time flies by… First the motorbikes shoot by, followed by cars, side by sides and finally the monster trucks. In three hours they have all passed and catching up later in the day is near to impossible as 700km+ road transfers between were not uncommon.

Location finding in the mountains is a little easier as competitors should be on gravel roads, in the sand dunes however it’s a different story… In the desert there is only a mass of virgin sand, without any tire marks or indication where the rally route will be. The best tool is a good set of ears and fast legs. I had all my basic camera equipment in my F-stop backpack ready to unpack and start shooting. A nice feature about their Satori pack is that I can access my gear from the backpanel, keeping the sand out and it quickly zips back up.

Creating varied work is the icing on the cake! As I was feeding the official Saudi Dakar channels with fresh daily content, my goal was to produce different types of images everyday. Yes the landscape changed over time, but the race is a repetitive format (at least visually).

For those who are stuck in a rut to produce mixed work I’ll share my tips on how to keep on delivering varied magic.

So how do you spice up the mix??

Admittedly some days were better than others. Weather, landscape, sun angle, deadlines and access had a big impact on how my visuals worked out. With most elements out of my control, there is still no option of returning to base empty handed. I had some days where the morning location just didn’t work and it is a tough call to leave early in the hope to catch competitors later in the day with better conditions. During the early mornings you get to see all competitors just after the starting line when they are close together in racing order. Later in the day they spread out massively leaving big waiting times in between. As mentioned good planning is key.

The Dakar Rally camp (or bivouac as the Frenchies like to call it) is an interesting bubble. For photography, it’s a possible to get in close with international athletes and their crew, to pick up stories and hang out with follow creatives. Camp is a daily roving village of 3,000 competitors, mechanics, medics, media and organizers who call it home. Assembled at a new place every day, the logistic behind the daily rebuild is mind blowing. During the day the competitors play and at night the mechanics get their time to work their magic. We sleep in tents or campervans, cramped in small spaces and there is no hiding from the noise. During the few much needed hours of sleep we are treated with revving engines, noisy power tools, banging hammers. A hidden treat at the Dakar Bivouac…

I took little over 40,000 images, many went global thru the different social channels. There is talks about a coffee table book and keen to see what the final media clippings will be. I picked my top 60 for my own website , trying to find a balance between RAW action, stunning landscape, rich culture & hospitality and the human spirit of the Dakar Rally. Got check it out.

No surprises, days were intense… Just imagine spending three wild hours shooting on location than drive a distance similar from Paris to Milan. Upon arrival edit your content, upload the best select, eat followed by a noisy night sleep. The next morning wake up super early again only to do it all over again including the drive back to Paris. And repeat this 14 days in a row… It’s nuts! I did about 9,000km of travelling, mainly by car with an occasional helicopter ride. A big shout out to Meshari my personal driver for getting us thru the course safely!

Despite the hard work it was an epic experience. I loved it. As a team we had a blast. We over-delivered on content and stories so all big smiles in the end!

Would I do it again? For sure … book me in. I love this kind of expedition style content creation, looking for real RAW stories and constantly being on the move. I seem to be at my best with very little sleep, limited showers and no comfort. Always up for an adventure.